Who does not remember the feat of Hannibal crossing the Alps with an army of elephants? It happened during the Punic wars, the fierce struggle between Rome and Carthage for hegemony in the Mediterranean. The remains of the city that had the audacity to challenge the Roman Empire are in Tunisia.

Carthage was founded in the 9th century B.C. on the Gulf of Tunis. From the 6th century onwards, it developed into a great trading empire covering much of the Mediterranean and was home to a brilliant civilization.

In the course of the long Punic wars, Carthage occupied territories belonging to Rome, which finally destroyed its rival in 146 B.C. A second – Roman – Carthage was then established on the ruins of the first.


Legend has it that coming from Tyr in Phoenicia, princess Elyssa (Dido) founded the “New City” (Carth Hadasht, in Phoenician) in 814 BC. As time passed it became the powerful capital of a maritime empire stretching over the whole western Mediterranean basin, before seeing Rome, its rival and enemy, compete with it, supplant it and then defeat it, taking it and destroying it in 146 BC.


Once part of the Roman empire, Carthage was rebuilt under Octavian Augustus at the end of the lst century BC and endowed with the attributes of a large Roman city : urban infrastructure, public secular and religious buildings, sumptuous houses.


The Antonine Baths is the richest and most imposing complex of the archaeological site of Carthage. It consists of the baths themselves, located on the shore, not far from the ancient port installations, and in the opposite direction, of gardens enclosing vestiges dating to different periods of Antiquity. 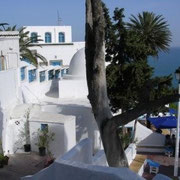 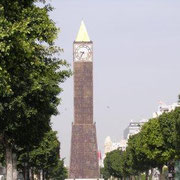 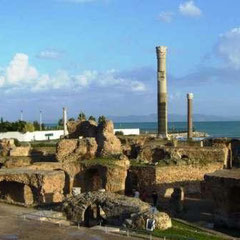 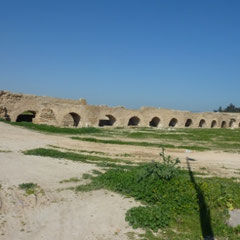 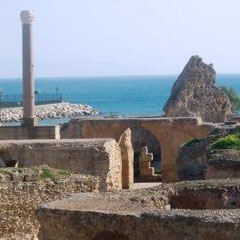