The archaeological city of Dougga

Visiting a true Roman city without forcing imagination is possible in the best preserved archeological city in North Africa.

The importance of this visit is confirmed by its declaration of World Heritage by UNESCO in 1997. Really exceptional.

Dougga, or Thugga, is undoubtedly the most prestigious of Tunisia’s archaeological sites. Several factors contribute to its standing on the Tunisian archaeological scene: its location on a spur dominating the rich Mejerdah valley (Thugga, in the Libyc language means green), the size of the site extending over several dozen hectares and covering several historical eras, the vegetation – in particular the many centuries old olive grove surrounding it - and of course, the excellent state of conservation of most of its monuments, some of which, such as the capitol or the theatre, were “restored to their upright position” during a campaign undertaken just after the first world war by prisoners of war.

Therefore, from the “dolmens” to the Byzantine fortifications, all the stages in the history of ancient Africa are illustrated on the site by outstanding monuments, buildings that figure amongst the most elegant and elaborate of the Mediterranean basin, such as the capitol, the theatre, the Lybico-Punic mausoleum, or the superb patrician villas.

The UNESCO qualified Dougga as a World Heritage site in 1997. 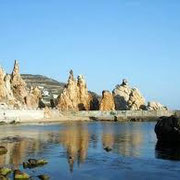 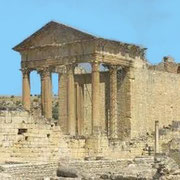 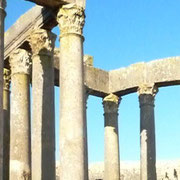 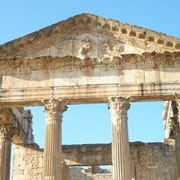 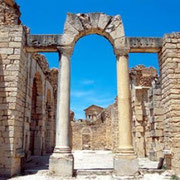