The gladiator fights is possible without using the magic of cinema. Just over an hour from Sousse, the greatness of the Roman Empire awaits us.

The impressive ruins of the largest colosseum in North Africa, a huge amphitheater which could hold up to 30,000 spectators, are found in the small village of El Jem. This 3rd-century monument illustrates the grandeur and extent of Imperial Rome.

Classical Thysdrus (today El Jem) is now no more than an overgrown agricultural village, 60 km south of Sousse. Nonetheless, it houses the impressive ruins of the largest amphitheatre in North Africa, built during the 1st half of the 3rd century. The monument is almost elliptical and measures 149m long by 124 wide and 36 m high. The tiers of seats, which had disappeared and have now been partially reconstructed, could accommodate up to 30,000 spectators, ranking it 3th after those of Rome, Capua and Pozzuoli. The arena measures 65m along its longest axis, and has two large underground galleries crossing it, through which actors, wild beasts and machinery could pass and wait in two series of eight underground cells.

For a long time it had no other role than that of a historical monument but in the last two decades the El Jem coliseum has served to host the symphonic music festival in summer as well as other artistic events. 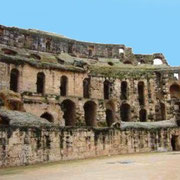 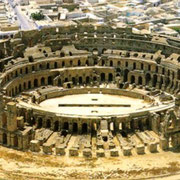 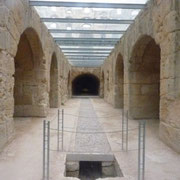 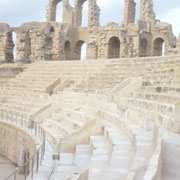