If a destination undoubtedly attractive, is the Sahara desert ... name derived from the word Tuareg Ténéré (desert).

One night among the dunes and the stars for a roof is, without doubt, an unforgettable experience. Desert Rose Service offers you confirm this Yadis Camp in Ksar Ghilane, which can only be reached by 4X4. Souvenirs made in the material used by the Bedouins and equipped with heating and air conditioning. Need to book months in advance.

At the same place, the Paradise 3*.

The Sahara is the world's largest non-arctic desert, and technically the world's third largest desert. At over 9,000,000 square kilometres (3,500,000 sq mi), it covers most of Northern Africa, making it almost as large as the United States or the continent of Europe. The desert stretches from the Red Sea, including parts of the Mediterranean coasts, to the outskirts of the Atlantic Ocean. To the south, it is delimited by the Sahel: a belt of semi-arid tropical savanna that comprises the northern region of central and western Sub-Saharan Africa.

The Sahara has an intermittent history that may go back as much as 3 million years. Some of the sand dunes can reach 180 metres (590 ft) in height.

The Sahara's boundaries are the Atlantic Ocean on the west, the Atlas Mountains and the Mediterranean Sea on the north, the Red Sea and Egypt on the east, and the Sudan and the valley of the Niger River on the south. The Sahara is divided into western Sahara, the central Ahaggar Mountains, the Tibesti Mountains, the Aïr Mountains (a region of desert mountains and high plateaus), Ténéré desert and the Libyan desert (the most arid region). The highest peak in the Sahara is Emi Koussi (3,415 m/11,204 ft) in the Tibesti Mountains in northern Chad.

The Sahara divides the continent of Africa into North and Sub-Saharan Africa. The southern border of the Sahara is marked by a band of semiarid savanna called the Sahel; south of the Sahel lies the lusher Sudan and the Congo River Basin. Most of the Sahara consists of rocky hamada; ergs (large sand dunes) form only a minor part. 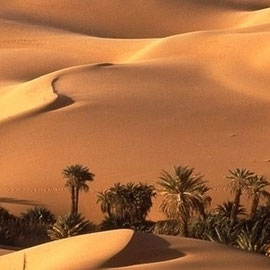 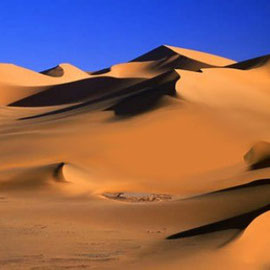